In 1958, more than 60 years ago,  I passed my novice test in Ridgewood, NJ.  The FCC assigned KN2MSP on February 11, 1958, and I was soon on the air with a borrowed home brew 15-watt transmitter and a venerable National NC-109 receiver.  A Heathkit DX40 soon replaced the home brew transmitter after I passed the general class exam in New York City that summer.

The N in my call was dropped to yield K2MSP, and I later received WB6HQF as a second call while in school in California.  After graduation with a BSEE, my wife and I moved to New Hampshire, where I was assigned W1DSB.  I worked for three years for Sanders Associates, in Nashua.

We moved back to Palo Alto, California, in 1969.  I was employed as an electrical engineer by Applied Technology, but I spent spare time building ham accessories and writing articles for Popular Electronics, RTTY Journal, and Ham Radio Magazine.  My current call was W6LLO, and I was quite active on RTTY.  There weren't many dining rooms on our street that featured Model 28 Teletype machines!

The introduction of the Heathkit H8 computer in late 1977 provided  the spark for what was to become COMMSOFT.  I began to write software for the H8 in assembly language for hams.  The first software article I wrote appeared in the second issue of  REMark Magazine, in October, 1978. REMark, published by Heath, was the "Official magazine for users of Heath computer equipment."  My article, "An ASCII/Baudot Driver for the H8 System," described an interface circuit and software for using a Teletype machine as a printer for the H8.

The H17 Disk Drive and HDOS (Heath Disk Operating System) were introduced in in late 1978.  Each floppy disk stored a "massive" 102.4 kilobytes of data, and programs could be loaded in seconds rather than minutes with this new innovation.  I soon converted the growing cassette-based RTTY program to DOS and continued development.

CW89 and Cipher89, both by Brent Simons, WA6CGX, were added to COMMSOFT's  product line in 1981.  CW89, with its split screen display, provided a pretype buffer for sending code and the display of incoming decoded Morse code.  Cipher89 was a program designed for shortwave listening.  It was able to decode Morse code and lightly encoded digital (RTTY) transmissions.  For example, Cipher89 provided tools to flip bits in the incoming data stream to see if an otherwise unreadable message might be deciphered.

In the early days of ham computer applications there was no such thing as a TNC, let alone a Soundblaster. To fill the need for a way to connect audio to the computer,  I designed the Codem.  The Codem was added to COMMSOFT's product line in 1981.  COMMSOFT also became a dealer for the iRL line of RTTY Terminal Units.

Slow Scan Television for the Apple ][

PhotoCaster was the creation of Ken Rothmuller, WA6NFA, who viewed the Apple II as an excellent basis for a Slow Scan Television (SSTV) system for amateur radio.  Ken combined his passion for photography with his engineering skills in hardware and software design to create PhotoCaster.  The PhotoCaster board had audio in and out jacks that could be connected directly to a ham transceiver to send and receive photos.  The resolution of the images was fairly low due to limitations in the Apple video design.

A second board, PhotoViewer, was added to the product line to improve the image quality by adding true gray scale and color pixel rendering to the system.  The PhotoViewer was the first gray scale video device for the Apple, and the resulting images were striking.

COMMSOFT sold PhotoCaster, PhotoViewer, and a video camera with tripod in a complete image processing package to hams and others interested in this new grahics capability.

Howard Nurse, now W6HN, began the design and development of CommCat in 1999.  With its release in early 2002, COMMSOFT's products have gone a complete circle. 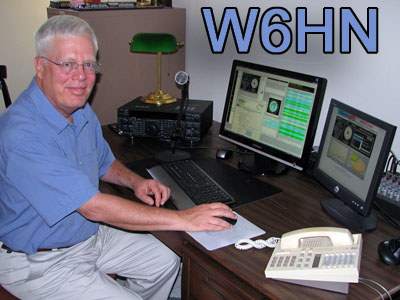 Please visit my weather page where I provide live weather conditions for Healdsburg along with a web cam view looking out over the Dry Creek Valley.